She is a helpful and a nice ally, sometimes pushy. Nearly everyone was friends with her. However, she stole Dream Island letting the friendship down.

In Take the Plunge: Part 2, Leafy appears rescuing Woody telling him that "there is life out there to enjoy". Later, she appears to be a contestant. She promised to form an alliance with Pin. Later, two allies chat about Flower and agreed to run her over. Blocky was concerned about them doing it. As a result, Flower kicked Pin and Leafy. Pin said with joy that they were flying, Leafy agreed. However, they bumped Teardrop and Leafy held on the platform. Leafy screamed for Blocky's help. Unfortunately, Blocky hold Leafy the platform and stood with his feet. Flower was showing off her Non-slip shoes So Ha! to Blocky. However, she fell and held onto Pin. After Pin licking her, Leafy congratulated Pin and all but Blocky fell with Leafy's accidental step on his feet. Pin and Leafy were left, they did a rock, paper, scissors challenge. Pin won by using scissors but gain a conflict that Leafy complained that it was not fair. Announcer prove them that they were wrong that they are now leaders that can choose their own team.

In Take the Plunge: Part 2, since Leafy and Pin had an opportunity to pick a team. First, she chooses Ice Cube to be her ally. Ice Cube thanked her because Pencil rejected her to be part of the alliance. Leafy asks Ice Cube who to choose. She had no idea, so Leafy chose Teardrop, as she glared at Leafy looking puzzled feeling like she does not like to talk. Flower explains Teardrop does not know how to talk. Leafy and Ice Cube chose Needle in their team. Leafy stopped the fight between Snowball and Needle, telling to "choose someone else". Snowball answered back to not to pick Coiny. Leafy then chose Tennis Ball since he is smart. Later, Flower until there were two left, instead of Woody, she chose Rocky.

In the first episode of this season, Leafy flees to Yoyleland and stays there for the rest of the season.

She is seen again in the second episode when she throws knives at Gelatin, Needle and Puffball.

Leafy is seen as a cameo in Welcome Back at the end as she is seen attempting to kill Coiny and Fries. She stops when she looks at Coiny doing something disturbing. 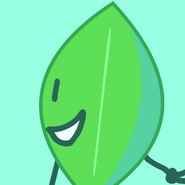 Add a photo to this gallery
Retrieved from "https://object-shows.fandom.com/wiki/Leafy?oldid=8639"
Community content is available under CC-BY-SA unless otherwise noted.